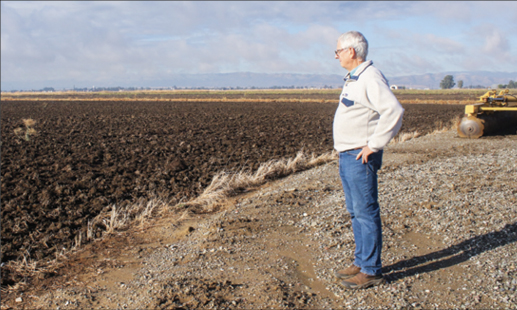 With rice harvest underway in the Sacramento Valley, Colusa County farmer Don Bransford should be running his combine, delivering truckloads of the grain to a nearby dryer.

Instead, he stares out into a field of bare soil he recently tilled to tidy ground that had been inundated with weeds after it laid fallow all season. Because of the drought and water cutbacks to farms, empty fields are a common sight this year. But such visuals don’t show the economic toll beyond the farm, Bransford pointed out.

“There’s a greater invisible impact going on in the communities,” he said.

Rice farming remains the economic lifeblood of towns such as Williams, Maxwell and Colusa in Colusa County and Willows in Glenn County. This year, with virtually no rice being harvested in the two regions, “there’s real stress within the communities here,” Bransford said.

Since he started farming rice 42 years ago, Bransford has never fallowed 100% of his rice ground. The west side of the Sacramento Valley, where he grows rice, took the brunt of the water reductions. Some 600 square miles, or 370,000 acres, in the region did not get planted this year, according to the Northern California Water Association. Farms in the Glenn-Colusa Irrigation District planted just 1,000 acres of rice when they typically grow about 100,000 acres, said Bransford, who serves as district board president.

As a result of the reduced water deliveries to farms, rice production statewide has fallen 50%, to about 250,000 acres, the California Rice Commission estimated. Drought impacts this year are expected to cause a loss of some 14,300 jobs and about $1.3 billion in economic profit, according to the University of California, Davis.

Farmers who idled ground say preventive-planting crop insurance will help them. But they expressed concern for the many support businesses that are vital to the rice-farming infrastructure and that are hurting because of the reduced rice acreage.

Bransford pointed to rice mills in his community that typically run two shifts a day and are now running one. Warehouses that dry and store rice have closed some of their facilities. Trucking businesses have less rice to haul. Suppliers of fertilizer and other chemicals have seen sales plummet. Town merchants also are suffering, he said, because “when people aren’t getting paid, they just cut back on their buying.”

With so much unplanted rice ground, Bransford said there has been a “significant impact” on the agricultural workforce. Some employees are having to drive farther from home to look for work. Others may be collecting unemployment checks, Bransford said, but they will miss out on the overtime and double-time pay common this time of year “when most of our employees make the bulk of their money.”

At De Pue Warehouse Co. in Colusa County, rice harvest season should be a busy time of year for its drying and storage facilities throughout the Sacramento Valley. Its office in Williams gets busy too weighing truckloads of harvested rice.

The company typically operates seven to eight dryers during harvest, he noted, but it will probably run three or four this season. With reduced plantings last year due to the drought, De Pue dried 50% of its normal volume of rice. This year, Dennis estimates the amount will be about 10% of normal.

As such, he said he was forced to lay off 35% to 40% of his workforce. If all the facilities are running full bore, he said, De Pue would be hiring 60 to 80 additional people. So far, he’s hired three. He said he anticipates hiring a few more people once the company’s walnut hulling business gets busier.

Whereas farmers with crop insurance will receive some compensation for their lost income, Dennis said ancillary businesses such as De Pue don’t have such insurance and depend on farmers for revenue.

Chris Torres, who farms in Colusa and Glenn counties, also didn’t plant any rice this year, which he said is unprecedented. Even so, he said his farm will “fare OK” because crop insurance payments will get him through the year. It’s his trucking business that’s suffering, he noted.

“It’s not going to be an easy road because there’s just not going to be the work coming up the pipeline for our trucks,” he said. “I depend on the rice industry to keep my trucks going.”

This time of year, trucking companies typically charge a premium to haul rice out of the field in a timely manner, he said. Truckers make their profit margin during harvest because they do a lot of short hauls and use their equipment more. During the off-season, they haul dry rice out of warehouses, and that work will also be considerably less this year, he said.

“We’d be going sunup till sundown right now, if harvest was normal,” Torres said. He estimated he may have 10% of the fall harvest work that he normally has this season and that his trucking business will be at least $100,000 short of its normal net income.

Other businesses such as NAPA Auto Parts and Alderson Ranch Supply in the Colusa County town of Princeton also have felt the impacts of the drought. During harvest, it would be busy every day repairing tractors and tires and selling parts. “This year’s just slow,” owner Brian Roach said.

Josh Hughes, manager of Holt Ag Solutions in Williams, which sells farm equipment and parts, said his business is “at the mercy” of the farm economy, which depends on water. With farmers not growing as much rice, they’re not using their equipment as much and not wearing out the parts that the company sells, so they’re spending less money at the store, he said.

“There’s just not the volume out there as a normal season,” Hughes said, adding he expects business will remain slower through at least 2023.

With farmers still receiving proceeds from last year’s rice crop, Denise Carter, a Colusa County farmer and supervisor, said she thinks the “cash-flow crunch for a lot of people” will come next year. Affected farms and businesses are having to “tighten their wallets,” she said.

That means less money for charitable giving to support everything from Little League to junior livestock auctions at the fair to a variety of nonprofits. “It’s the classic trickle down,” Carter said.

Because California rice fields typically supply more than 50% of the feed and habitat for migratory waterfowl, farmer Don Bransford said the reduced acreage could potentially lead to “a devastating winter” for those birds. Botulism occurs when there’s overcrowding of geese and ducks where they feed, he noted, and with recent discovery of avian influenza in the state, the impacts could be huge.

Less rice acreage and bird habitat will also affect winter tourism, Carter said. People visit rice regions such as Colusa County for duck hunting and viewing, she said, during which they spend money at restaurants, hotels, gas stations, and hunting and fishing stores.

Carter noted some of these establishments already are expecting less traffic this winter. Ultimately, she said, counties will take a hit from the reduced sales revenue and use taxes generated by the many businesses tied to the agricultural economy.

“It’s very frightening to think about the future,” she said.

(Ching Lee is an assistant editor of Ag Alert. She may be contacted at clee@cfbf.com.)

Ching Lee is an assistant editor of Ag Alert. She may be contacted at clee@cfbf.com. Permission for use is granted. However, credit must be made to the California Farm Bureau Federation.

This author does not have any more posts.