Felon on a Quad Chases Victim While Armed with a Gun 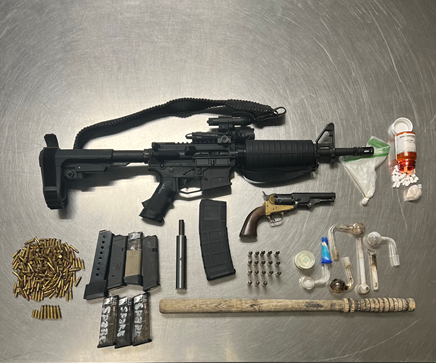 SUMMARY: On Sunday, September 25, 2022, at about 8:43 a.m., the victim called 9-1-1 and reported a male with a gun was riding a quad and chasing him, near the intersection of Amboy Road and Mojave Road. Deputies responded, gathered information, and with the assistance of the Sheriff’s Aviation Division, located the suspect, Pejman Elahi.

Elahi was arrested for PC 245(a)(2) – Assault with a Deadly Weapon and PC 29800(a)(1) – Felon in Possession of a Firearm. Elahi was booked at the Morongo Basin Jail and is being held in lieu of $50,000 bail. Gilbert Gonzalez Sr was arrested for H&S 11350(a) Possession of Narcotics and booked at the Morongo Basin Jail, where he was later cited and released.

If you have any information related to this investigation, please contact the San Bernardino County Sheriff’s Department Morongo Basin Station at (760) 366-4175. Anyone wishing to remain anonymous may contact We-Tip at 1-888-78-CRIME.